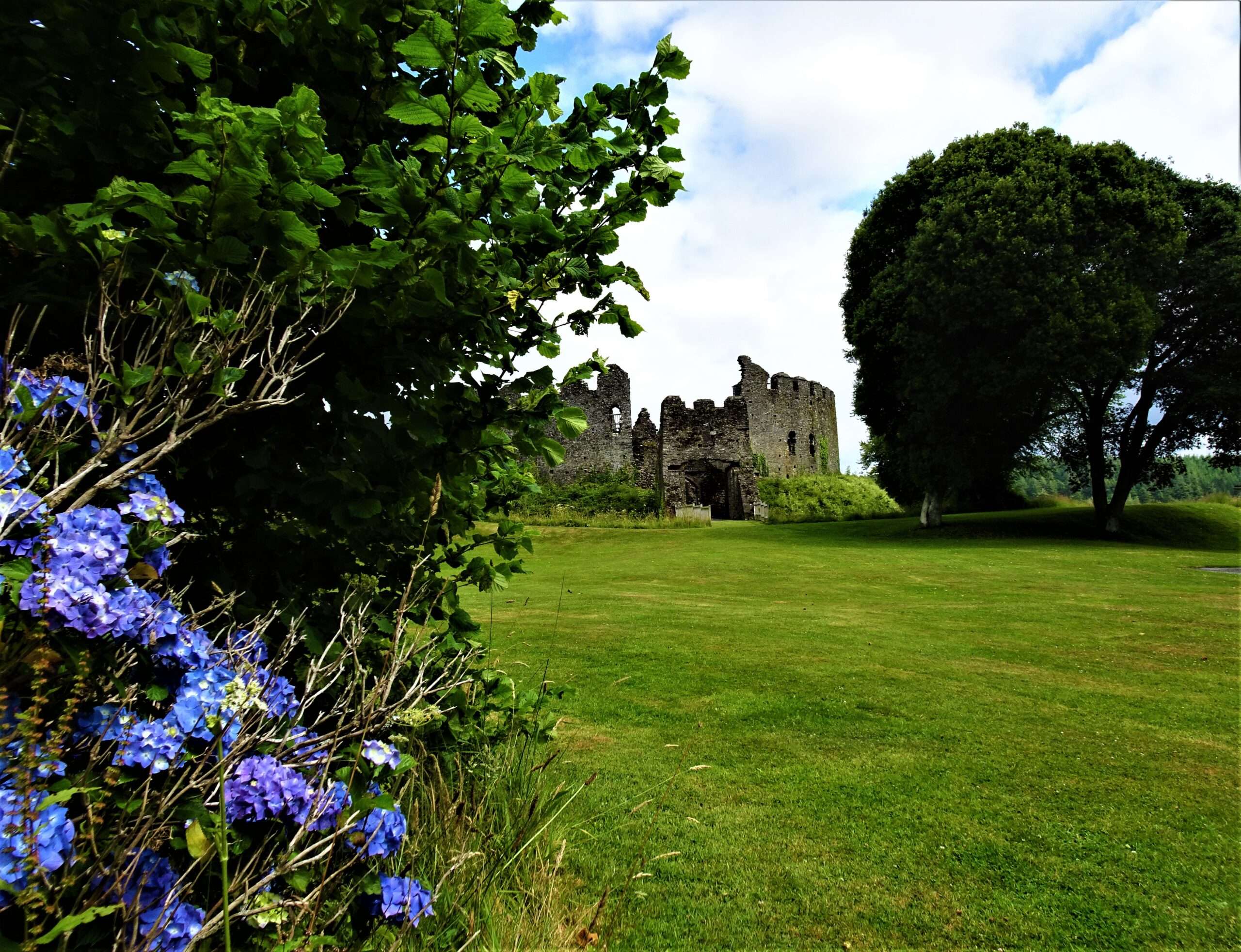 It’s hidden on the Cornish landscape, and even from the car park, it isn’t visible, although it crests a mound. Most of the images online are taken from the air or from close up. It’s usually unknown to people when I mention it since going there years ago, and yet it’s one of the county’s most significant historical ruins.

It’s managed by English Heritage, who are very welcoming and helpful when buying tickets in the bijou but fascinating shop, offering gifts, educational toys, drinks, and other goodies. Tickets are cheaper online, and the place isn’t open on Sundays, so something to keep in mind.

On returning recently, as I walked towards it, I was struck again by the stronghold’s magnificence. The expanse of grass leading upwards had been part of the outer ward which is no longer in existence. In the Middle Ages, it had contained a great hall, kitchen, chapel and chambers, as well as outer buildings. The vicinity would have been bustling in comparison to the verdant tranquil approach these days. The entrance was on the Lostwithiel side then, with views over trees and fields to the stannary town that regulated the tin industry. The town is larger today but as scenic as ever.

The surviving circular structure formed the inner walls and among others was occupied by the Black Prince, and Edmund the Earl of Cornwall, who was the wealthiest person in England back in the 13th century.

Over the footbridge, spanning a small moat, and through the arched doorway, I wandered around taking in the architecture. Up a modern stairway to the Wall Walk, the surrounding countryside looks stunning over the battlements. And in its glory days, the castle was surrounded by parkland where deer roamed.

Maps reveal that the River Fowey flows nearby further down the hill, but it is screened by summertime’s greenery and foliage. Occasionally, the sounds of trains can be heard rumbling by, but they couldn’t be seen either.

Gazing towards the inner courtyard over a labyrinth of stone walls, with cavities where lintels supported floors, it’s absorbing to visualize how the space was used over the centuries. The area includes all usual fortification features.

The top circumference covered; I went to ground level to explore more, especially the wardrobe which appeared huge from above. Walk-in ones of today are nothing compared to this grand chamber. With two inner windows and only one doorway, it ensured the safety of the lord’s valuables stored in there.

The castle’s circular design makes it easy not to miss anything, and in a while, I was back past the porter’s lodge and winding around the parameter where wildflowers grow around the top of the moat. Bees, butterflies, and other insects fluttered and hummed, and were a charming end to the trip.

It was thirsty work, so I tramped into Lostwithiel in search of refreshment and wasn’t disappointed.

An Off and On Affair

Down In the Woods

A Bimble in Banbury