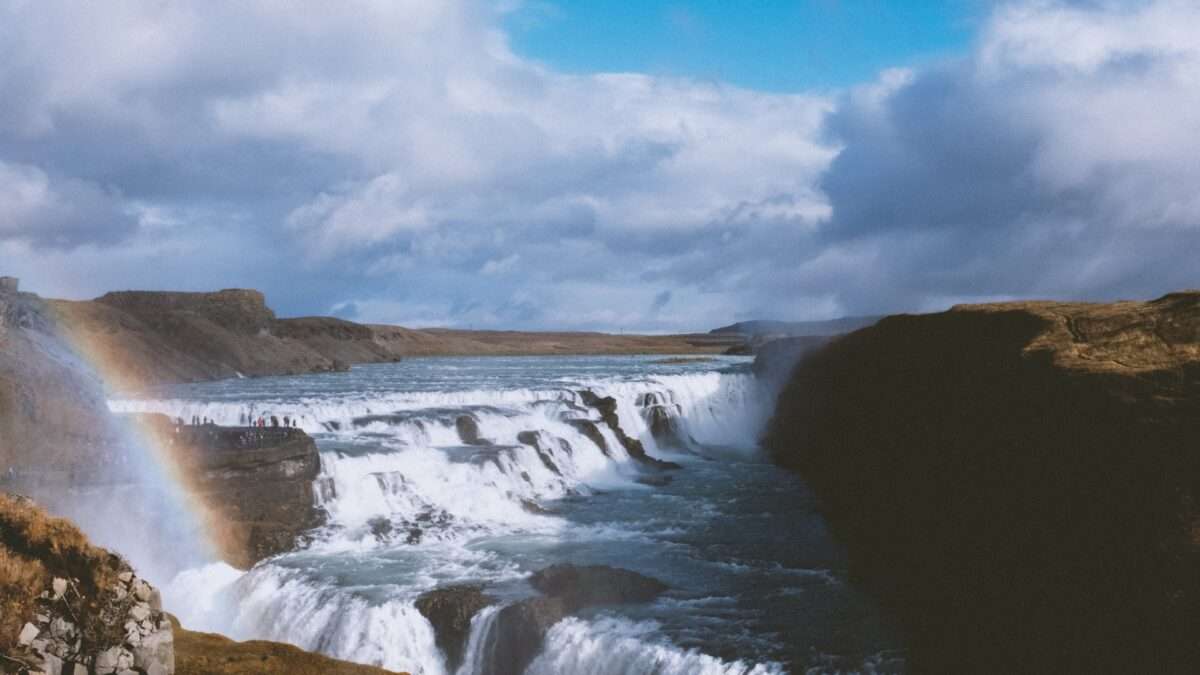 Set in autumn time and a story close to my heart. I entered it for the Iceland Writers Retreat annual short story competition in 2017 and overjoyed when it was awarded third place.

“We’re nearly there.” Abigail could see a misty haze showering upwards over a wide range of black and green landscape as she parked the car. It was November, she pulled her fair isle sweater down over her trousers. It was too big, much too big, but that didn’t matter, it felt comfortable and just right.

Leaning over, she unbuckled the seat belt. “Come on, Theo. Let’s do this – while it’s still quiet.”

Abigail pulled him affectionately to her side and trudged down gravel pathways.

As always, at first sight of Gullfoss, she drew in a deep breath. Even from afar, the waterfall’s roaring energy was emotive and not just because it was their special place. Initially, they had discovered its beauty, when on a gap year travelling through Europe after university.

Thinking of the glacial waters translated name, Golden Falls, Abigail could see why. At dawn break, the sun was escaping the clouds and changing the two converging waterfalls into churning metallic liquid. She hoped that a rainbow might shine across too, as it had on their second visit a few years later when she had asked him to move in with her. He’d picked her up, spun her around to the surprise, and then cheers of other tourists.

Down by the powerful waters, it was difficult to do up her jacket with the carrier bag clutched in her hand, but she managed to juggle it from one to the other, the contents cumbersome, but much too precious to let it go. Eventually, she zipped herself up and tightened the hood around her face, her nose felt cold and spray collected on her eyelashes like fine gauze.

It was almost time, she stood with Theo, contemplating the surging waterways, crashing and tumbling down the canyon where the duo waterfalls became one. This was the place.

Closing her eyes, his deep tones washed over and through her, until she opened them again, she blinked back tears and swallowed hard. “I remember,” she echoed. Reluctantly she loosened her grip of the carrier bag’s handles and rolling down the sides, she uncovered a lightweight urn. She hugged it tightly to her, unscrewed the lid, gently held it away from her breast, tipped it up and watched as Theo’s ashes dropped down and became saturated in the bubbling water before vanishing and being swept away on their final journey.

“Rest peacefully, My Love. We’ll be together again one day, but until then – goodbye,” Abigail said softly, as she caressed Theo’s old Icelandic sweater, tugging its extra width around her body, as a rainbow crowned the sky.

Thank you, Mr and Mrs Puckey