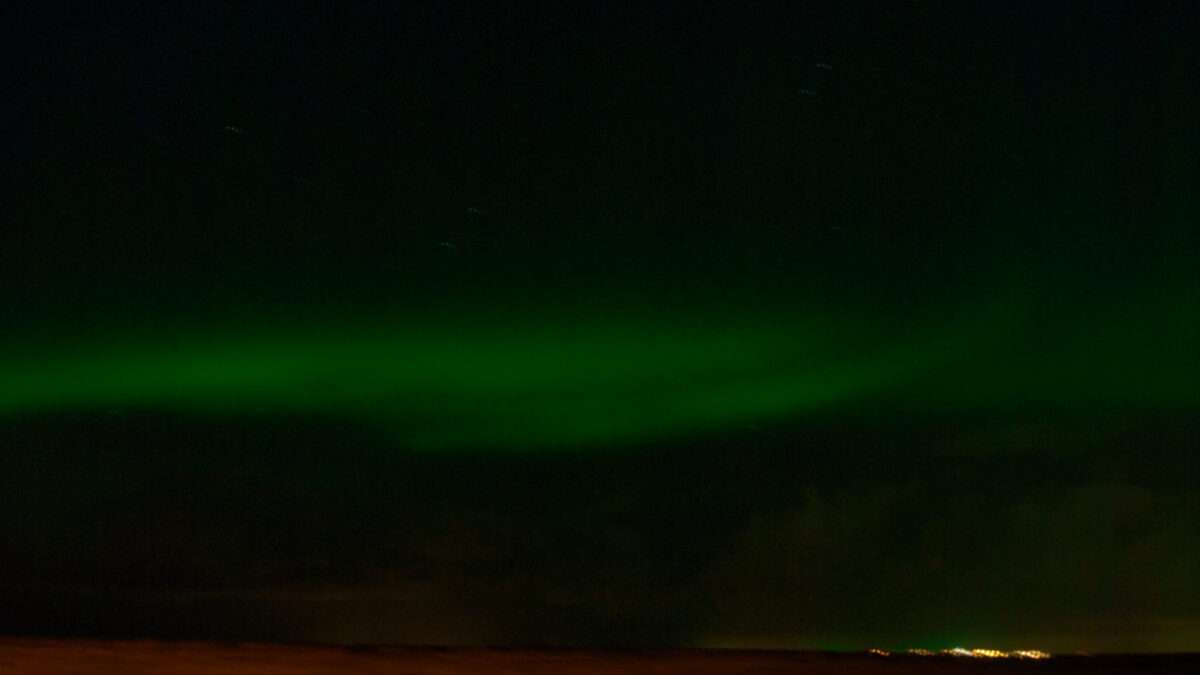 Land of Ice and Fire was another name I’d heard for the Nordic island before travelling to Iceland, and after a week there I could understand why. The fire part certainly represents the glow the country has kindled in my heart.

We planned our holiday; the Blue Lagoon, a glacier, geysers, waterfalls. One part could never be organised though, and that was seeing the Northern Lights, my greatest wish. Knowing they are elusive, I reminded myself not to be dispirited if the weather conditions weren’t agreeable for creating their magic throughout our stay.

The first day we set off to Reykjavik by bus – our enchantment began.

We were impressed by the greenness, carved with lakes and rivers around Iceland’s capital. It’s a city of varied outlooks, colours and architecture. Here, I discovered my camera’s battery had drained; I was disappointed, but even more so later on.

Our enthusiasm so great, we strolled far under pink and purple streaked skies and found ourselves down at the waterfront. At dusk, we admired a Viking ship sculpture, situated as if sailing the sparkling sea towards snow-crested mountains across the bay.

After tucking into a hearty meat soup in a bistro we headed back, happily exhausted and ready for bed, but we were in for a surprise. With aching feet, we walked from the bus to our hotel. My husband looked to the sky; I’d forgotten about checking it for the Northern Lights. It was our first night there, after all.

“That’s them,” he exclaimed.

Thinking he was joking. I stared, as a wide wispy band of green cloud spiralled overhead. “Well. I’m not impressed,” I grumbled. “It can’t be them.” I pointed to the cloud. “That’s not big enough,” but the band rapidly expanded. I changed my mind. In disbelief we gazed upwards, green gauzy particles mingled with glittery blues, and altered shape, floating like a fairy tale’s giant genie over the rooftops. The street lights were overpowering. We decided to drive out of town. Tiredness dismissed, we raced to our room, grabbed the car keys and a map, googled nearby locations and set off in chase. We had only been in Iceland twenty-four hours and the great Northern Lights were performing. We weren’t sure where we were going, but came across a country lane, overlooking a lake and rivers meandering to the sea. Ducks honked in celebration, they seemed as delighted as us.

We parked up; I leant against our car, whilst my husband set up his camera nearby. Mine was still out of use, I was downhearted at first, but as I became mesmerised by the heavenly show, my vexation evaporated. Unable to fuss – instead I relaxed, watching the Northern Lights wonder. Iridescent yellows, aquamarine, and blues merged, trickled, swirled and danced over the sky and reflected on the waves, bejewelled with town lights faraway.

Witnessing the Northern Lights was an honour. A gift of nature – they were exquisite, mysterious, and magnificent.

Who's Peeping Through The Window