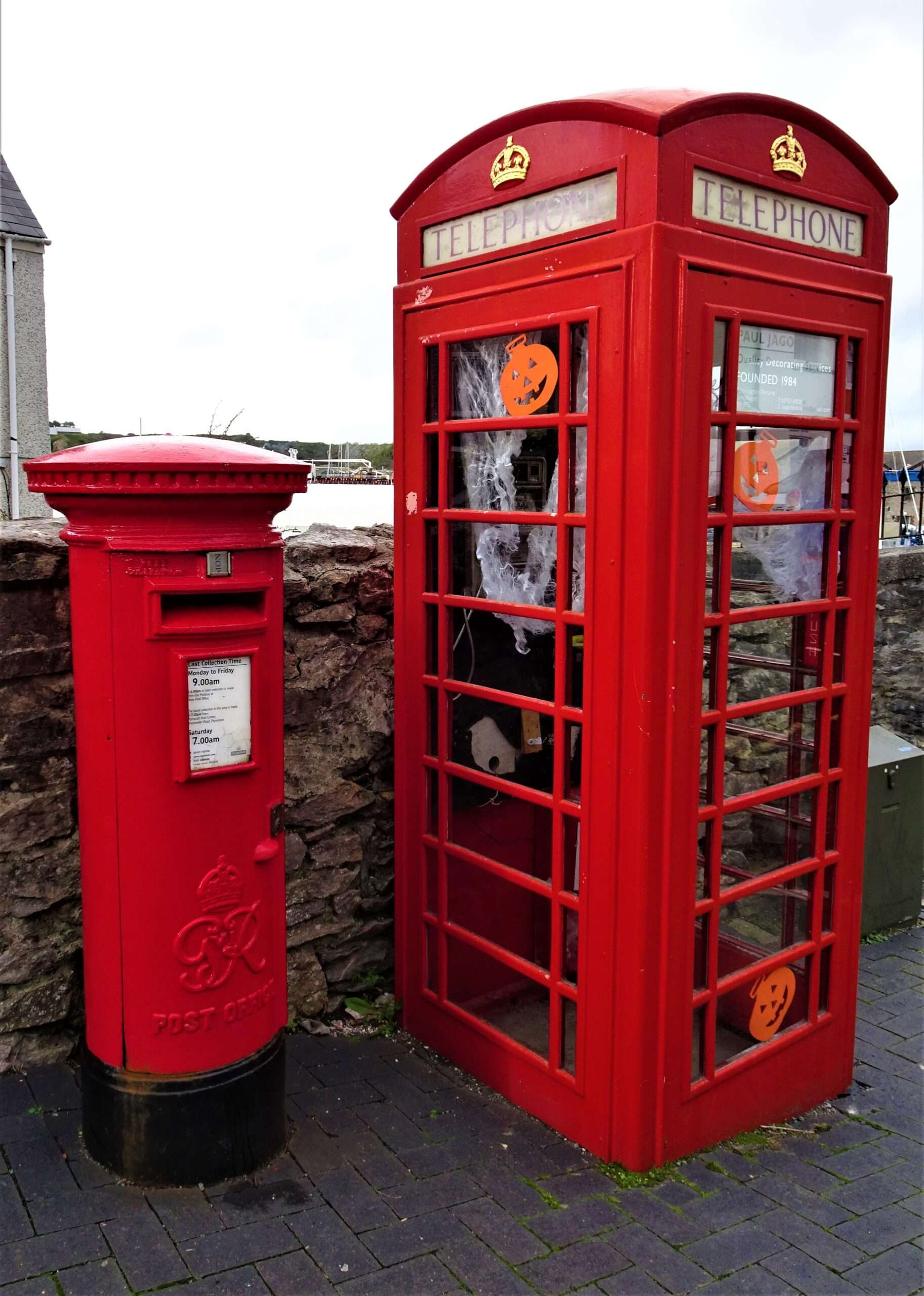 It’s surprising how some of these red iconic kiosks have been reinvented, and when I saw this Halloween themed telephone box at Turnchapel, Devon, it reminded me of an article I had written.

The red telephone box is a familiar sight, part of our heritage, and appeared on London streets in 1926 with its stylish domed roof and crown decorated fascia.

I don’t think the designer, English architect, Sir Giles Gilbert Scott, envisaged just how iconic the kiosk would become. His K2 was the United Kingdom’s earliest completely red booth, the colour chosen so that it could be located easily and was more noticeable than the red and cream K1 version before it.

Those and later editions remain today, including the K6, which was commissioned by the General Post Office and also designed by Sir Giles Gilbert Scott to commemorate King George V’s Silver Jubilee in 1935. This was the first box to be situated widely outside London replacing older ones, including countries in the British Empire.

The crown feature has changed over the years. From the Tudor to the Edward Crown in 1953 with the coronation of Queen Elizabeth II. Then in 1955, Scotland’s telephone boxes started to be embellished with the Crown of Scotland.

Whatever the design, they have been greatly admired, creating interesting memories associated with them over the decades.

As a child in the sixties, my family didn’t have a house phone, so I noted the telephone number of a call box nearby and arranged to be there for a set time to receive calls from friends. I never chatted long because in their heyday a queue usually formed outside the kiosks.

The interior was just as appealing, from the papery smell of telephone directories to the sound of the dial with its metallic purr. Calls were controlled by press buttons. Push A, to be heard, or B, to receive money back if the dialled call was unanswered.

These workings were constantly replaced in line with modern-day requirements. There have been updated exteriors of different sizes too, and from 1968, were painted a more vibrant red.

Imagine what exchanges these compact walls have heard over the years.

Nowadays, when not being used as a payphone because of the popularity of mobile phones, several have been reutilised. Some have been converted to miniature libraries, others to information centres, and bijou art galleries. They seem to attract art in other ways as well, and images have been featured on album covers, of pop culture idols, including David Bowie and One Direction.

Some clever micro-entrepreneurs created a mini salad bar in one, another a bar, and there’s even a coffee shop with an umbrella outside the tiny establishment. Two years ago, another was repurposed as a single person night club, with bright lights, glitterball, and a dial-a-disc music system.

Intended for communication, it only seems right that in a Scottish hamlet, one became the smallest Internet café. In certain places, kiosks have ‘CASH’ emblazoned across the top and house automated bank machines.

There are so many great reinventions, but the best revival for these booths must be those storing defibrillators. In the heart of communities, the old telephone boxes now contain vital lifesaving equipment and easily reached.

No wonder numerous red telephone boxes are protected under listed building status. And whether used as a traditional call box or occupied by something quirky, they are just as valued today, as they were when the cheery structures were originally encountered.

Boats, Art, And Lawrence Of Arabia

Winter Walk In The French Alps